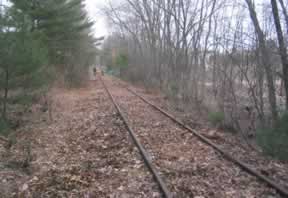 A section of the trail in Acton after a trail clearing in 2006.

It has been one step back and two steps forward for the Phase 2A design. The step back, a realignment of the Rt. 2A (Great Road) bridge, is an interesting one that we believe will be worth the wait. The original design for the bridge, tentatively approved by MassDOT, was that it follow the centerline of the right of way over Rt. 2A at an angle However, someone at MassDOT got the excellent idea late in the game that it would be preferable to have the bridge cross Rt. 2A at an angle that is closer to perpendicular. This realignment will result in a longer overall bridge with the abutments set further back from 2A and two piers between the abutments. This would result in three shorter spans compared to the previous design that had one long span between the abutments. The result should be more aesthetically appealing since the bridge will be shallower as it crosses Rt. 2A. Since MassDOT had already approved an earlier design, it is graciously picking up the marginal additional design costs. This includes the necessity of additional borings because the bridge footings will be in alternative locations. Also, additional wetland assessments are needed since the approach to the bridge from the north will swing to the east within the right of way. MassDOT is working to ensure that this redesign will not significantly delay the start of construction.

Another area of slow sledding has been finalizing the terms and conditions of an agreement between MassDOT and the towns to take over control of the ROW. A draft agreement has been prepared by DOT Rail and was sent directly to the Federal Highway Administration (FHWA) for an initial review. This was done because federal money has been provided to the Commonwealth to partially fund this project, and MassDOT wants to ensure that future discussions with the Towns can use a document that FHWA has accepted. David Shedd, the Project Manager at MassDOT, reassures us they are pushing FHWA to finish the review so the towns can start commenting, and the negotiations can begin in earnest. The towns are acutely aware that the terms do matter, particularly with respect to liability and insurance ramifications.

It is FY2014, the fiscal year in which funds are available to start Phase 2A construction. All parties are anxious to tie up the loose ends and move on to bidding and construction phases. You can count on the FBFRT to be its usual pesky self in advocating that the process does not grind to a halt and construction does indeed start in FY2014. We hope to report significant forward progress soon.

This article along with several others about the trail status is from the Friends of the Bruce Freeman Rail Trail Fall 2013 Newsletter (pdf).

Tagged with: Acton, Phase 2A, Rt 2A Crossing