Chugging Along in Concord

This article appeared in the Fall 2014 Friends of the Bruce Freeman Rail Trail Newsletter – Read the complete article here.

Persistence paid off for future rail trail users in April 2014 when the Town of Concord finally heard from MassDOT/MBTA that an alternative crossing of the Fitchburg commuter line in West Concord was possible.Prior design plans had proposed that the trail follow the existing Commonwealth Avenue sidewalk, passing in front of the former West Concord Supermarket, requiring trail users to walk their bikes at this location.

The new crossing will follow the former railroad spur located behind Beharrell Street businesses, cross the MBTA/Town commuter parking lot driveway, then cross the commuter rails just west of the mini-high platforms where new crossing gates will be installed for trail users. The trail will continue through the parking lot between the new Woods Hill Restaurant (former WC Supermarket) and the West Concord Depot/Club Car Café into Junction Park, then cross Main Street/Rte.62 and continue toward the Assabet River. 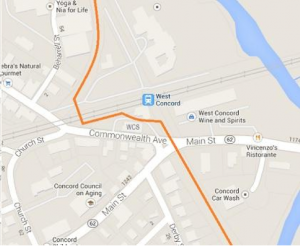 Last September two meetings were held with State employees to view the new crossing location and receive additional input on the crossing design. The first meeting was with MassDOT staff, Project Manager David Shedd and Complete Streets Engineer Lou Rubito, and focused on accessibility for all and safety features of the alignment. The second meeting with MBTA personnel focused on maintaining access for the West Concord Depot/Club Car Café tenant and cross easements between the West Concord Depot site and Wood Hill Restaurant site. With this information, BFRT Design Engineer Greenman Pedersen Inc. (GPI) and sub-consultant TranSystems (railroad engineering specialists) have begun 25% design drawings of the commuter crossing. Once the 25% design plan has been reviewed and accepted by railroad operations engineers and MassDOT engineers, design of Phase 2C should proceed without further delay.

Also this fall, the Town of Concord submitted an application to the Community Preservation Committee requesting an additional $250,000 to be used toward further design of Phase 2B as needed and design and/or construction of the historical/cultural interpretive elements of the railroad in West Concord. The early concept for this historical/cultural interpretation was developed in concert with local railroad historian Henry Keutmann and Historical Commission member Geoffrey Taylor along with GPI, MassDOT and staff from Concord’s Dept. of Planning & Land Management.The Concord Board of Selectmen submitted a letter to MassDOT last July presenting this initial concept to confirm that existing rails identified as an important aspect of the concept could remain in place.

Town staff will be working with State representatives this fall to prepare legislation to transfer the land adjacent to the prison on Commonwealth Avenue to the Town, as authorized at the December 2013 Special Town Meeting. This parcel will be used for municipal purposes, including parking and other amenities for the Bruce Freeman Rail Trail.

The BFRT Advisory Committee has been working diligently on addressing requests from trail neighbors for fencing and other amenities, identifying historic artifacts to preserve and interpret and finalizing other aspects such as bridge designs. The Advisory Committee has also beengathering information regarding the long-term monitoring and maintenance of the trail, providing that information to the Division of Natural Resources and Concord Public Works. Once 75% design plans have been prepared, it will work with MassDOT Project Manager David Shedd to conduct an additional public hearing to provide the community with an
update, because the last hearing was held in 2008.